DRIVING TO THE ISABEL FROM THE 401:

The Isabel Bader Centre for the Performing Arts is located at 390 King Street West.

If you are coming from HWY401, drive south on Sir John A MacDonald Blvd until it ends at the Waterfront. Turn left onto King Street. The first traffic light that you see (at Morton Way) is the entrance to the Isabel. The Isabel is on the south side of the street.

WALKING FROM DAVID C SMITH HOUSE TO THE ISABEL:

The David C Smith Residence is located at 236 Stuart Street (at the corner of Stuart and Albert).

GETTING AROUND KINGSTON WITH KINGSTON TRANSIT (THE BUS):

There are Kingston Transit bus stops in front of the Isabel on both the south and north sides of King Street. The bus costs $3.00 per trip (children under 14 travel free).

Affordable weekly passes and multi-ride packs are also available. You can purchase them at City Hall at 216 Ontario Street (Route 3 stops there). Some types of multi-ride packs can also be purchased at the Lovell Clinic Pharmacy in Kingston General Hospital, located at 76 Stuart Street (approx two blocks due east from the David C Smith House Residence).

The most useful bus routes for traveling between the Isabel, campus (the Residence) and downtown are Route 3 and the 501/502 Express. Details about these routes are listed below. 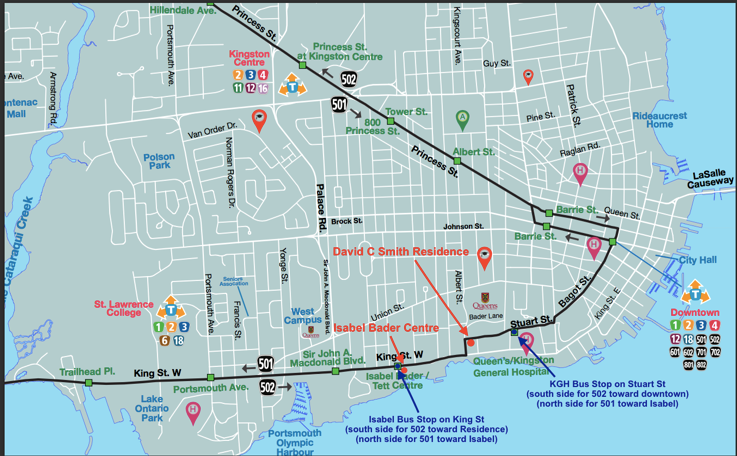 You can take Route 501/502 to travel between the Isabel, campus, and downtown. The 501 and 502 are the same route. Buses are given different numbers based on direction of travel.

On campus, the bus stops at KGH (Kingston General Hospital) about two blocks east of the Residence, near the corner of University and Stuart, on either side of Stuart Street:

You can also take Route 3 to travel between the Isabel, campus, and downtown.

On campus, the bus stops at the corner of King and Albert, on the north and south sides of King Street:

Uber operates in Kingston, but Lyft does not.

The taxi companies in Kingston are pretty reliable (more so than the Uber drivers, who can be a little hit-and-miss). Modern Taxi and Amey’s Taxi both have downloadable apps, or you can call them at the numbers below: